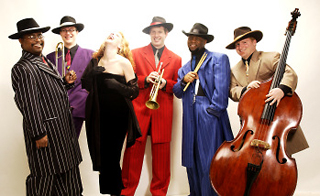 Imagine sitting in a club or cafe, at a remote table, waiting for the new band to make an appearance. The air is heavy with smoke, the brightest light is directed at center stage. Cigarette girls sashay by, martinis glint in the stage light. But you haven't stepped back in time. This is now.

Originally, " says Gwen, "I was caught between two genres of music. I had been singing in pop bands for a few years, but was restless inside this particular form of music. I wanted to stretch little more than the usual pop fare allows...though, in my opinion, the Beatles still rule the universe musically and always will...but jazz gradually began to feel more like home." Following her introduction to and collaboration with Bill Wilson (a talent as great as his father, Teddy), Gwen was introduced to many of Atlanta's prominent jazz musicians

"I suppose you'd call me a song stylist," she says. "Nancy Wilson. Peggy Lee. Ella is my scatting muse. I have a long list of heroines. And then there's Sinatra, who made it possible for all of us to break the rules. It's all about adventure, not being hemmed in by ëcategories' of music. Think outside the box."

If you need swing...jazz..R&B...rock n' roll...Gwen has a band to fit almost any occasion. From a solo performer playing background piano...to a ten-piece swing or pop band...you've landed on the right page.