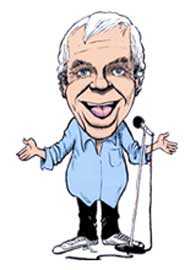 For over twenty years, the unforgettable caricature of veteran comic James Gregory has stood grinning: his blue shirt untucked, his arms outstretched, a carefree welcome to a down-home, hilarious storytelling experience. The trademark caricature is the essence of James Gregory´s comedy: whimsical reflections on life from the front porch.

His grass-roots following of tens of millions of loyal fans hear him weekly on radio shows like Rick & Bubba (24 markets, 800,000 listeners), John Boy & Billy (111 markets, 3 million listeners), Steve & DC (27 markets in 16 states) and Bob & Tom (125 stations, 4.5 million listeners). Without the momentum of a pop media machine, he has become a world-class, successful comedian.

Gregory was born into a poor family in the rural town of Lithonia, Georgia. At age 11, he worked 37 hours a week at the local grocery to help support his family. "There was never a backup for me," he says. "I knew that everything I wanted in life I´d have to pay for myself. Anything you want costs something. I had to earn it on my own."

Gregory began earning a living as a salesman, but his real persuasiveness was as a storyteller. A hilarious storyteller. "It was an accident that I ended up in comedy at all," he admits. "I never had the desire, or else I would have started earlier." In 1982, his friends convinced him to do an open mic night at the Punchline, an Atlanta comedy club, and he was an instant hit. "I was 35 years old when I got my feet wet," he said.

"I don't do small town humor," he is known to say to those who try to pigeonhole his appeal. His is a front porch humor: he tells the stories we all know, wherever we´re from. He makes fun of crazy family members and covered-dishes at funerals.

Ignoring the eggshells of the politically correct, Gregory pokes fun at everyone from health fanatics to animal rights activists, and his fans flock to hear him in droves. His success, like his comedy, has been initiated by the values he grew up with.

Twenty-two years later, it is this unique humor that packs the crowds into his sold-out shows. The absence of vulgarity or profanity sets James Gregory apart, and his stories are a carefully-crafted art. "I have lived long enough to know people, know life," Gregory reflects. "My comedy is based on my experience. I want to make the whole country laugh."