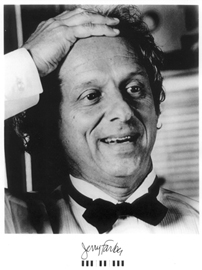 Jerry Farber is one of America's Top Stand-up comics and entertainers.

Nationally-known comedian and pianist extraordinare, Jerry Farber is #1 in Atlanta entertainment circles. He is the city's most recognized and acclaimed performer, entertaining for over two decades.

Jerry stars at local and national comedy clubs, and various charities and corporate functions all over the country. His style is inspired by the jazz and comedy greats: Dave Brubeck and Errol Garner to Woody Allen and Mark Russell.

Fans have voted Jerry One of the Top Five Celebrities in Atlanta in an Atlanta Constitution / WSB Radio Poll. He was elected Entertainer of the Year by Atlanta Magazine three times in recent years and Favorite Storyteller by Cobb Magazine.

His unique style of hip piano finesse and warm-blooded humor endears him to fans. Best of all, he personalizes each performance, weaving his audience into each routine. He performs at a near exhausting pace that leaves a crowd roaring at this Georgia Football Fan / Redneck routine and mesmerized by his music.

Jerry had a successful eight year run at his own night club. On doctor's orders, he made it an non-smoking club that attracted international recognition by Business Week, The New York Times, The London Times, CNN - Sonya Live, and an entry in the Encyclopedia Britannica as the World's first non-smoking night club.

Jerry is a local TV and radio personality in his own right, much as his brother Barry, the nationally syndicated New York radio talk show host. Jerry even ran for Mayor of Atlanta twice in the tradition of Pat Paulson, finishing third twice behind none other than Andy Young and Maynard Jackson.

As Farber is fond of pointing out, "A guy like me could never run for office in a country like China or Syria or Chile or ...Mississippi."

Jerry devotes countless hours to charity work. He has been recognized by the American Lung Association as their Man of the Year and the Variety Club of Atlanta for Humanitarian of the Year. Business audiences are among his favorite challenges. "I am best at breaking the ice and energizing a room, and the checks are always good."

Jerry has a best selling book Sex, Wealth and Power: How to Live Without Them This glib, irreverent collection of Jerry's humor is available in bookstores throughout the country.