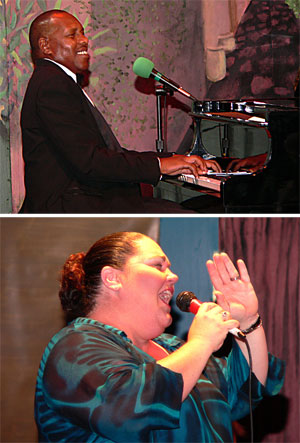 Lavon has been one of Hilton Head's most popular and finest entertainers for many years. Lavon plays multi-keyboards and sings. His style ranges from jazz and blues, instrumentals, love songs and ballads to upbeat contemporary and top 40 dance music.

Born in Thunderbolt, Georgia, Lavon grew up on Gospel music. His first instrument in grade school was the Violin and eventually the Viola. He was an inaugural member of The Savannah Youth Orchestra circa 1970. Motown, Rock and Roll, and Jazz have always been among his listening influences.

Years later Lavon was a product of the music of the 70's with the band The Sensations, an eight piece soul and rock band. The band traveled all over the southeast throughout Lavon's high school and early college days.

Lavon Attended DeKalb College (Now Perimeter College) in Atlanta, Ga. '79 - '81 with a concentration in Vocal Performance. He also studied Piano and Theatre at DeKalb College. He performed all over Atlanta with Jazz and R&B groups.

Lavon then moved back to Savannah and eventually landed on Hilton Head Island, SC. Lavon has had great success on Hilton Head Since 1981. He has performed in some of the finest Hotels, Jazz Clubs, and Private Country Clubs in the country; including locations such as Aspen, Colorado, Hudson Valley Area of New York, parts of Florida, and Texas to name a few. Lavon immediately captures his audiences with the warmth of the music and the personality of the performance. He is an amazingly talented Singer/Pianist. He has a great feel for his audiences and gives all of himself with every performance. Lavon draws people into believing in the music and the powerful human emotions of love and appreciation the music touches. When you combine his talent with soulful, amazing songstress and powerhouse Louise Spencer, you have a truly magical music event.

Louise Spencer, originally from Green Bay, WI., is as exciting as any singer in the business today. She has great range and power with beautiful tone and control. Louise has worked with many Hilton Head Island entertainers.

She has several recordings to her credit with local producer Scott Morlock and others including Phillip Myers and Lavon Stevens Live at The Jazz Corner. Louise is very active in the community performing Gospel music. She sings at her church. She has wonderful natural talent for singing. Her delivery is powerful yet controlled and her ballads are emotionally inviting. Her fun-loving personality comes through in up-tempo jazz arrangements. "What a talent!!"

Rounding out the band is Bass, and/or Saxophone, Drums --- a versatile compact group with all the right ingredients to be inspiring, energetic and true to the music. Trish; Catering Sales Manager; The Westin Hilton Head Island Resort and Spa
Lavon was great! Thank you so much for your assistance with this!
Everything was great. Lavon is very talented and a Callawassie favorite.
Lavon did a wonderful job at our party. We received many compliments on his music. He added a great touch, and we were most appreciative of his talents.
Joyce
Lavon very much applauded because of his beautiful vocals and of course it was a dinner and people were listening. I would definitely recommend him. He did a wonderful job and I appreciated your being in tune with what we needed for each event. Thank you so much.
Betty Brock, Membership & Meetings Director; Tennessee Fuel and Convenience Store Association
Lavon and the group were as good as I remembered. Our group really enjoyed hearing them again. Thanks for your help. It is a pleasure doing business with you.
© 2021 by Hilton Head Entertainment. All rights reserved.