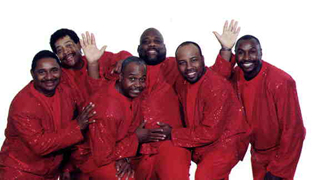 In an industry where the average life of a band is about five years, Liquid Pleasure has set a new standard. As they enter their 29th year, they have firmly established themselves as the South's premiere show and dance band!

Three out of the six present musicians who make up Liquid Pleasure are original members and grew up together in the shadow of the campus of UNC Chapel Hill. This type of longevity and consistency combined with exceptional talent, sets Liquid Pleasure apart from the rest.

They perform all across the USA from San Francisco to Vegas and New York plus everywhere in between. Over the years, the band has appeared with such notable artists as Paula Abdul, The Temptations, Whitney Houston, The Four Tops, Stacy LL Cool J, Aretha Franklin and Jeffery Osborne.

Whatever the occasion, Liquid Pleasure will treat you to an evening of pure fun and enjoyment!

Liquid Pleasure is:
Kenny Mann - Leader, manager, comedian, wise-cracker. He also finds time to play keyboards and all the horn parts. A founding member of the group, he is the creative force around which the band flows.

Melvin Farrington - Bass guitar; Melvin is an original member and is the man behind the thumping groove in the band's sound.

Leonard Hackney - Lead guitar; Leonard's good natured humor and smooth licks are a driving force behind the band's sound and show. He is also and original member.

Archie Logan - Drums; The "new kid on the block". Archie, a native of New Haven CT, has been with the band for two years a lays down a smoking groove.

Anthony Springs - Lead vocals; Anthony has been with the band for over twenty years and brings a powerful vocal style along with acrobatic dance moves to the stage.

Charles White - Lead Vocals; Charles has been delivering a smooth and soulful vocal style and hot dance moves for over 11 years.