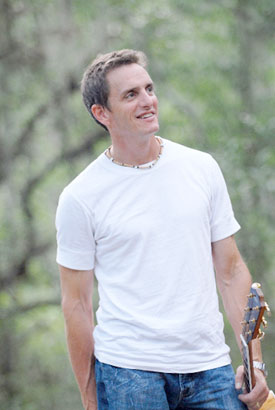 Reid has been pleasing all types of audiences for over 25 years. His musical trek has taken him through rock, pop, country, r&b, beach music, and many points in between. His very eclectic song list draws on all of his experience to provide a variety of music to please the most discriminating audience.

From his musical beginnings in Raleigh, NC where he cut his teeth on "The Beatles", "The Eagles", and "America", Reid submerged himself into learning all he could about music and performing. He spent many years in bands ("Eon", "Spectrum" , "Schizo") performing rock and top 40 with a side of disco and R&B.

He eventually moved away from performing in a band and concentrated on his solo show and on his songwriting. Reid's acoustic shows were huge successes and soon he found himself performing every night in bars and clubs in and around Raleigh. His songwriting efforts brought him further recognition finally leading him to Nashville, TN and publishing deals with Millhouse Music and later Sony/Tree Publishing.

Reid's first love however, has always been performing and that's where he shines. That led him to Hilton Head where he is one of the busiest performers on the island. Apart from his numerous solo shows , Reid has also performed as lead guitarist for the premier bands on the island including "Jo Jo Squirrel and the Home Pickles", "the Lawn Jockeys", and "Deas Guyz". In his shows Reid flows effortlessly from croud rousing sing-alongs to tender ballads to YOUR favorite song. So sit back and enjoy. Chris and Mehan Blair
Thank you so much for playing at our wedding, you were fantastic! Our only regret is that we were not able to thank you in person. We will be sure to recommend you every chance we get!
Margaret & Alden - June Wedding
What a night! Alden and I wanted to express our gratitude for the amazing performance you put on out at Moreland. Our friends kept talking about you, way after the oyster roast ended. You were the perfect addition to Moreland and we just wanted to sincerely thank you for the effort you put into making Saturday such a memorable event (and thank you for putting up with all the bugs).
Reid Richmond we don't know where to start with your review... you were outstanding and provided such a great atmosphere for our Wedding Weekend Welcome Party! You were the perfect complement for our party and our guest had so many compliments about your song selection! Reid was at the venue early, set up and started without me even directing him and played throughout the entirety of the party, it was amazing! Reid was great to work with and we highly recommend him! Thanks again for providing nonstop great music for our party!
© 2021 by Hilton Head Entertainment. All rights reserved.