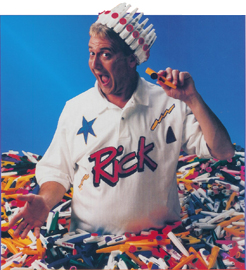 Rick Hubbard celebrates more than a decade of providing positive family entertainment throughout the United States, and every moment has been KAZOOBIE! Rick invented the word, "kazoobie," to describe his performance. It means "exceptional, fun, and involving everyone." Audience involvement is the key, and no entertainer in America gets more audience members into the show than Rick Hubbard.

Rick Hubbard and His All Kid Kazoo Band
(Music, Comedy and Fun For The Family)

Rick's "Kazoo Band" shows get EVERY MEMBER of the audience involved. Each person receives a FREE KAZOO and performs with Rick in the grand finale. Leading up to this kazoobie event, Rick performs a number of his popular original songs along with "Kids Appearing On Stage" or "KAOS" as Rick calls it. While Rick performs on guitar, banjo, steel drum, or another exotic instrument, kids participate on stage -- dancing, singing, shaking maracas, or playing inflatable guitars (that Rick gives away). Every song is an opportunity for kids to participate. Every kid gets a chance to be on stage. Even some grown-ups get to be on stage with Rick. It's a fun and positive experience for the whole family -- it's KAZOOBIE!

Rick Hubbard's "Who Can Do It, I Can!"
(Music With A Message For Schools)

Often when Rick visits a town to perform a festival or concert, schools ask him to perform for the students. Rick has developed an interactive musical show just for elementary schools. It's called, "Who Can Do It, I Can!" and it brings a positive message to kids about getting along with others, taking care of our planet, and feeling good about yourself. Teachers, administrators, and students rave about the excitement Rick brings to school. In turn, the school appearances bring many kids to join Rick's kazoo band at the festival or concert.

Some of Rick's Achievements

Rick Hubbard has performed at festivals and concerts throughout the United States including the Seattle International Children's Festival and the Kennedy Center in Washington, DC (where he sold out five shows). He has performed at Busch Gardens (Tampa), Sea World, Tweetsie Railroad, and Disney World. Recently the American Academy of Children's Entertainers nominated Rick as America's Best Variety Entertainer.

A class clown from the beginning, Rick found an outlet for performing in a guitar given to him by his grandmother when he was eleven. His first public performance was in a school play in the seventh grade, singing "If I Had A Hammer." As a teenager, Rick played in rock bands, jazz bands, and folk groups around his hometown of Laurinburg, NC. Accepted at Wake Forest University, Rick performed in the opening concert and later played bass as part of the back-up band for the legendary Chuck Berry. After college, Rick joined a group and toured the USA, Jamaica, and Saudi Arabia. In 1986, Rick began to perform for kids in the Atlanta area, and soon family entertainment was his career.

You bet! Rick performs over 250 shows per year at festivals, concerts, schools, theme parks, and resorts. Many fans have seen Rick at such summer spots as Kiawah Island, SC; Sea Island, GA; Fripp Island, SC; and Hilton Head Island, SC (where he has performed since 1987). Rick loves to perform and tours constantly .

Rick began using computers years ago to create the musical tracks that accompany his performance. Over $20,000 worth of gear goes into producing his show. Many musicians envy his quality sound system and CD-quality sound tracks. Most audiences assume that a full band is performing on-stage. Then they discover that Rick is making all the sound with his computer system and his guitars. Add to that the sound of several hundred kazoo players and you've got one KAZOOBIE event.

Nearly a half a million kazoos have been given away at Rick's shows. These are high-quality plastic kazoos, safe for kids, and custom imprintable with festival logos and sponsor names. Rick's business, Kazoobie Kazoos, is one of the world's largest distributors of kazoos.