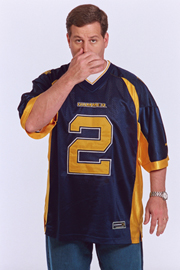 Whether delivering his popular keynote "It's all About Family" or his hysterical after-dinner comedy show, his smooth blend of homespun characters and outrageous facial expressions keep audiences rolling with laughter. Buzz's style of comedy is contagious as he plays with the audience rather than talking to them. Some of the audience members literally become a part of the show! Having performed for many of the top corporations and associations in the world, Buzz's ability to be funny without being offensive, make him a no-brianer for any event.

Buzz has performed on HBO's Comic Relief and MTV's Half Hour Comedy Hour. He's a man who is seriously committed to entertaining audiences with humor that is 100% clean and 200% funny.