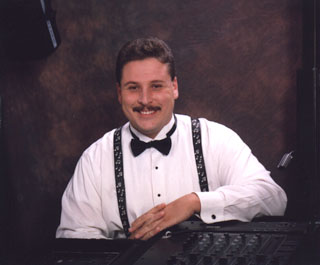 Originally born and raised in South Carolina, Tony ventured to New England in the mid 1980's and pursued a career in the disc jockey industry. After attending the Connecticut School of Broadcasting and graduation in 1989, Tony went to work in Boston radio for WXKS FM (Kiss 108) and also the Open House Party, a worldwide syndicated radio show.

After spending a short time in radio and having the opportunity of performing in many Boston area nightclubs and lounges, Tony found that mobile entertaining is what he enjoyed the most. In 1990, he started "The All-Disc Entertainment Agency, a mobile disc jockey service specializing in wedding receptions and corporate events.

Due to Tony's truly professional service and highly popular interactive disc jockey capabilities, the company quickly grew to be one of the largest entertainment agencies in New England: eventually representing a staff of 25 disc jockeys, over 100 bands and other performers, and scheduling entertainment for over 1000 events per year.

Tony has personally performed at over 1,500 events in his career. He has had the opportunity to perform for many celebrities including superstar, Arnold Schwarzenegger, his wife and NBC Datelines' Maria Shriver, the Kennedy Family, many sports stars and even once providing a sound system for the President of the United States.

After selling the New England business in 1999, Tony now resides back home in South Carolina and is looking forward to entertaining you. Whether you are looking for an interactive disc jockey with props and games for yourself and guests, or a more low-keyed approach, Tony will do whatever it takes to make you and your guest happy.