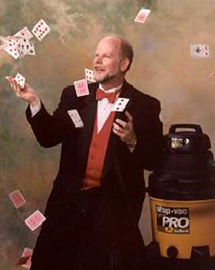 Yes, Strange is his real name and yes, he is. We guarantee the Glenn Strange Comedy and Magic Show will delight your customers, employees, upper management, friends, relatives, loved ones, and even your worst enemies by drowning them with tears of joy and leaving them breathless from laughter.

Glenn blames his unique, warped since of humor from being a victim of child abuse. No, not abused by his parents, but abused by the other kids in his school and neighborhood. For example: when the kids would play football, no one ever wanted Glenn on their side. So, they made him center for both teams. This meant he would spend the entire game bent over the football with his blood running to his head. After the game he would go home all red faced and confused as to whether he had won or lost the game.

So, in his efforts to be accepted by people and make friends, Glenn turned to comedy and magic. Everyone loves to laugh and people love seeing magic. With that basic idea Glenn has been entertaining and making friends the world over.

Glenn is from a small town just two hours and fifty six minutes south of Mt. Airy. Until the year 1980 Glenn had only traveled as far east as Myrtle Beach, SC, as far north and west as Bristol, TN, and as far south as Billy Varner's back yard. But today, because of his unique talents, he travels coast to coast, border to border, and sometimes he even goes over the border.

Glenn Strange....a comedian....a magician....who is clean....receiving standing ovations from comedy clubs, corporate events, and associations around the country. With over 20 years of entertainment experience he brings his talent, his experience, and his wisdom to guarantee you a quality first class event that people will be talking about for months, even years to come. You can not afford not to hire Glenn Strange. Your ease of mind and satisfaction are worth much, much more than the cost of the show.

Glenn has won numerous awards in competitions throughout the United States. Combining his comic skills with his original "Mind Reading Jack-in-the-Box" he won first place at the 10th Annual Atlanta Harvest. The next year he came back to Atlanta and won hornors at the Southeastern Association of Magicians Convention. In 1993 he was honored to be one of only 15 magicians recognized by the World Summit of Magic in Washington, DC. He was named "Magician of the Year 2001" by the "International Brotherhood of Magicians Ring 63". In 1998 he was on TV, but the "Circuit City" manager asked him to leave the store before he broke something.

Glenn's original comedy routines, and tricks have been published in many books and international magazines. He has been a featured performer at the most respected and renowned of magic conventions in the world. Conventions like: The International Brotherhood of Magicians in Long Beach, California; The Society of American Magicians in Indianapolis, Indiana; Tannen's Magic in New York; Abbott's Magic in Colon, Michigan; and Florida State Magic in Fort Lauderdale. He has also performed at the famous Magic Castle in Hollywood, California.

So, if you would like for your customers, members, friends, and fellow employees to praise you for making them have a "GREAT FUN EXPERIENCE" then look no further. Glenn Strange is your entertainment answer. Remember, your total satisfaction and ease of mind are the most important thing. If Mayberry had a magician he would be"Strange" ... "Glenn Strange".