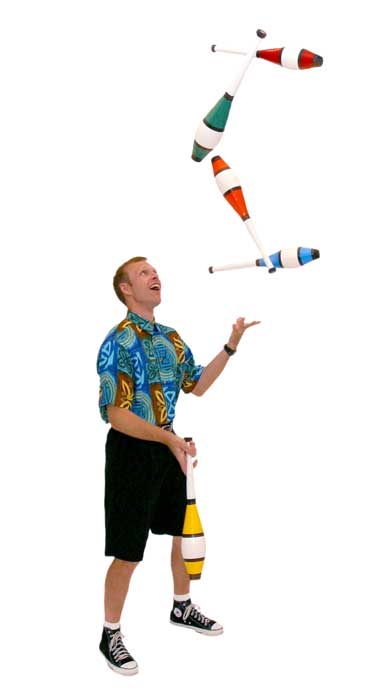 A full-time professional variety entertainer since 1986, Mark Lippard has toured all across the United States, Canada, Jamaica, Japan and Russia. His performances over the years include college, NBA and NFL games and he has been crowd pleaser at many festivals and corporate events. You may have even caught his act at your favorite resort or mall.

Mark has won several awards, his most prestigious being an International Jugglers' Association team championship with the innovative group, Manic Expressions. He has appeared on numerous television stations, both here and abroad, including a guest performance on ABC's "Good Morning America". Because of his energy and unique style, Mark Lippard is one of the top variety entertainers around. He works extremely hard to provide the high quality performances that you expect from a veteran entertainer.

Mark Lippard can provide shows and roving, or strolling, entertainment.

Mark offers a fast paced, high energy show full of wild and crazy visual antics. You will be amazed by his variety of talents, including comedy, juggling, fire eating, trick unicycling, balance and hilarious audience participation.

Mark enjoys people and it shows! His performances can be geared towards children, adults, seniors or families. As soon as he takes the stage, his connection with the audience is obvious. He has a warm, outgoing personality that draws people into the show.

The length of his shows varies, depending on the crowd, facility and type of event, but impact remains the same - it will knock your socks off! Mark is extremely flexible and easy to work with. His technical requirements are minimal. He can even provide his own sound system, if necessary.

Roving entertainment is when Mark mingles in and out of the crowd on weird unicycles - including a three wheeler, six wheeler, 10 1/2 footer and a tennis shoe wheel unicycle - and stilts. However, he is not your ordinary stilt walker! While on stilts, he juggles, eats fire, dances and makes wild balloon hats and animals. Mark really knows how to work a crowd! Roving works great at festivals, malls, trade shows, banquets and other special events.