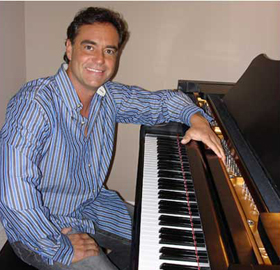 What a voice!!! What a performance!! Amazing!! These are some of the comments we recieve about Philip Myers.

Wonderful Shows to include his Dueling Pianos show, His Musical Tribute to Elton John and Billy Joel, Musical Salute to the Crooners, and his Tribute to Broadway!!! What a fabulous entertainer he is!!

Although he lived in Hilton Head Island for years and was the featured entertainment at the Hyatt Regency Hilton Head and Hilton Head Marriott Hotel, he now travels all over the world performing for High End Conventions.

Philip is not only talented in singing and playing but also his ability to connect with his audience is excellent. His voice sets him apart from most other entertainers.............. From Broadway to rock and roll and the great classics, he has a wonderful memorable show.

His back ground, originally from Tennessee and the University of Tennessee, receiving his Bachelor of Science in music education and vocal performance. His continued his Master studies in Orchestral Conducting with Robert Shaw at Emory. He was a staff writer at RCA records. He has been the featured voice to national jingles. He was opened shows for Elton John, Celine Dion, Kenny Rogers, Dolly Parton, Vince Gill, Willie Nelson and the late great Ray Charles. He has also performed for three Presidents.

I have used him for Conventions and Country Clubs in the Hilton Head and Bluffton area for years. I especially enjoy his Dueling Pianos show. There are always compliments!!!