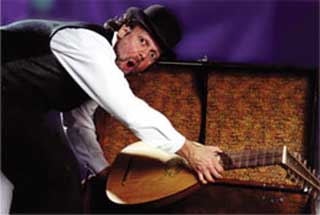 Sean performs regularly throughout the Eastern United States in schools, libraries, radio, television, concert and festival settings. He was selected for artist in Residency programs in Florida, Georgia, South Carolina (1990-present), and for Young Audiences (1999 to present). Mr. Driscoll reaches thousands of children and adults each year through hundreds of residencies, workshops and performances. 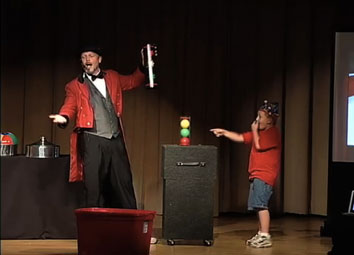 "The Orphan Boy and The Circus King"
Storyteller and musician, Sean Driscoll, combines comedy-theater, puppets, magic, music and animation into an extraordinary live performance. The show is about a young boy raised by a circus of misfits. It’s a journey of self-discovery as the audience and cast of characters help the boy discover his destiny. There is Ella the elephant who has bad allergies. When she sings she sneezes and sprays the audience with clear water. There’s also a lazy lion with curlers in his hair and crossed eyed acrobats swinging through the air without a care. The show is loaded with laughter and audience participation.This is a wonderful 50 minute character education show for kids ages Pre-k to 5th grade. 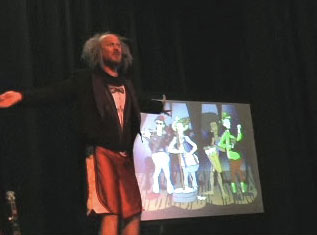 "Beathoven And The Big Note Band"
“The Big Note Band” has fallen apart! They’ve lost their beat, can’t remember the melody and don’t know the harmony! So their conductor, Beathoven uses comedy, magic and music to help them re-discover the essential elements of music. The band comes alive on a giant video screen with animated characters that interact with the audience. In the end, the band just can’t get it together. They are fired and the audience becomes Beathoveen’s new band in a giant jam session. Beathoven sings and plays a vast array of musical instruments including banjo, guitar Irish and African drums. The show is for children ages Pre-k to 5th grade. The show covers most of the national education standards for music covering melody, harmony, texture etc. 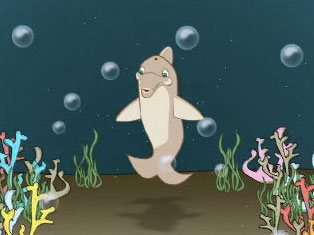 "Pirate Goodie And The Magic Chest "
Come along with Pirate Goodie Twoshoes and his parrot Pete on an amazing undersea adventure. Goodie can't remember how to open his magic chest full of treasure. So he calls upon the audience and his animated friends to help. The show includes a giant video screen with colorful animations and charming puppets. Plenty of magic, music and comedy make this show unforgettable. This is a 50 minute program for Pre-K - 3rd grade. For school shows there is an emphasis on character education. 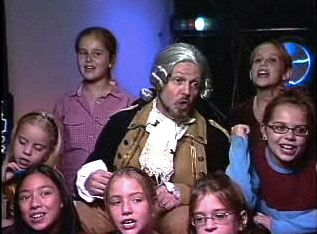 "Professor Time and The American Revolution"
Professor Time is off to Colonial America to find out about the birth of our nation. Students will find out what sparked the American Revolution and hear stories first hand from George Washington and Betsy Ross. The stories will teach them about the events leading up to the signing of the Declaration of Independence and the formation of our government. Students watch history come alive on a giant video with animated characters and historical images. Students also participate in interactive comedy skits to prepare them for the time travel adventure. At the end of each show audience members test their knowledge through a game show where the can win prizes. The 55 minute show covers many of the national standards for 3rd - 5th grade social studies.