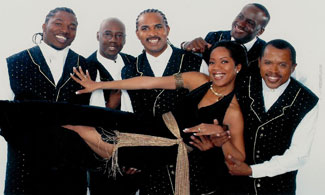 For more than 20 years The Maxx has been spreading the spirit and energy of its music all over the world. Since it's founding in the early 1980's at Atlanta's Therrell High School and Northside School For The Performing Arts the band has performed at more than three thousand events, for more than one million people on four continents. Today, founding members Rod Whittaker (bass/keyboards/vocals), Leroy "Roc" Lovelace (sax/vocals), Steven Rollins (guitar/vocals) and former active member now manager Tony Cooper are joined by more recent arrivals, Rainy Middleton (vocals), Darnell Springer (trumpet/keyboards/vocals) and Jimmy Calhoun (drummer) on a mission to carry they're innovative and authentic live performances to an even wider audience.

The band spent its first two years playing nightclubs, high school dances, college parties, amusement parks and concerts in and around Atlanta but quickly expanded their horizons up the East Coast and into Canada while it's members where still in high school. They made weekend trips to surrounding states, toured more extensively during the summer and appeared in concert with Kool & The Gang, The Commodores, Chubby Checker, Archie Bell & The Drells, Cheap Trick and James Brown. This early experience set the foundation for excellence that has been the band's calling card throughout its career.

In 1983 after most of the members had finished high school and were now in college at Georgia State University, the band started to narrow it's focus to the college market. For the next seven years they played at hundreds of colleges and college clubs in the Southeast, Midwest, South Central and Northeastern United States and were nominated for Campus Entertainer of the year four years in a row by the National Association for Campus Activities. During this time the band purchased a small studio and started writing, recording and performing their own music. As their original music became more and more popular with their live audience, record companies also began to take note. The band was courted by some of the biggest companies in the industry, but as the R&B side of the music industry went away from bands and more towards rap acts and solo artists the group decided to go in another direction and in 1990 another important chapter in the band's life began.

That year the band returned from a summer tour of Japan with a new direction. After spending the first ten years of their career playing almost exclusively to college audiences the band was ready for a new challenge and in the Winter of 1991 they began a journey that has take them to a new and ever expanding audience.

Michelle Martin; Director of Meetings and Events Georgia Food Industry Assocation
I loved them!!! They did a fabulous job and I would book them again.
© 2021 by Hilton Head Entertainment. All rights reserved.